"1 in 5 women are sexually assaulted while in college"

- The White House Council on Women And Girls

NightOwl is a mobile application that provides users with a safe and anonymous way to report potentially dangerous situations at social events. It is a social platform for communication aimed at college students and young professionals.

NightOwl was a part of the Integrated Product Development Capstone at CMU, our diverse team of design, engineering and business students provided holistic inputs and experiences from each field. 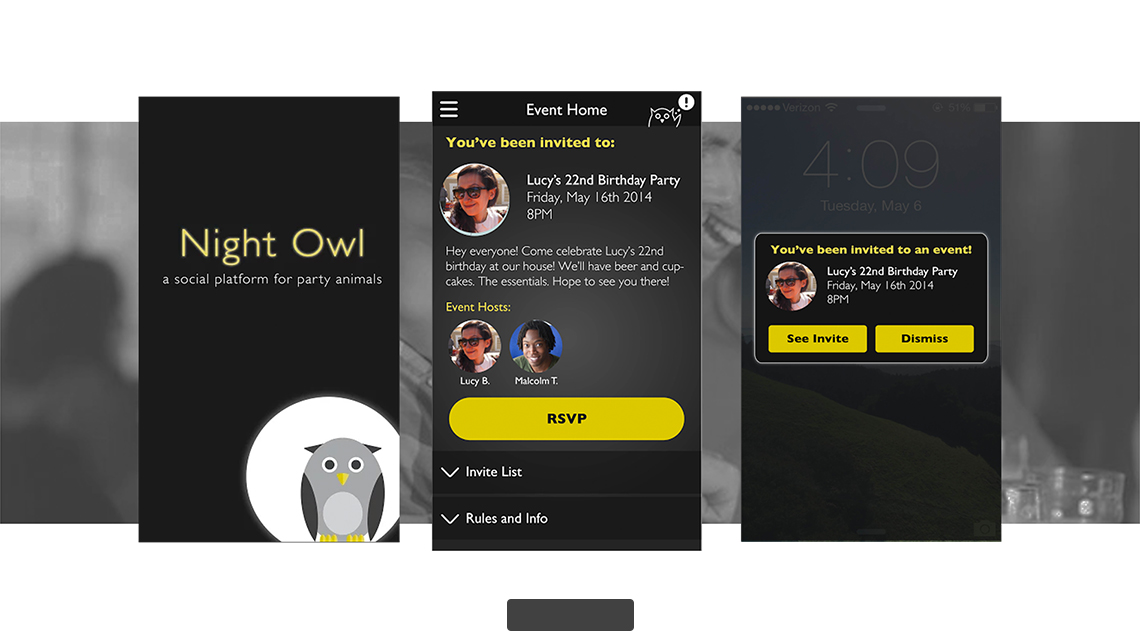 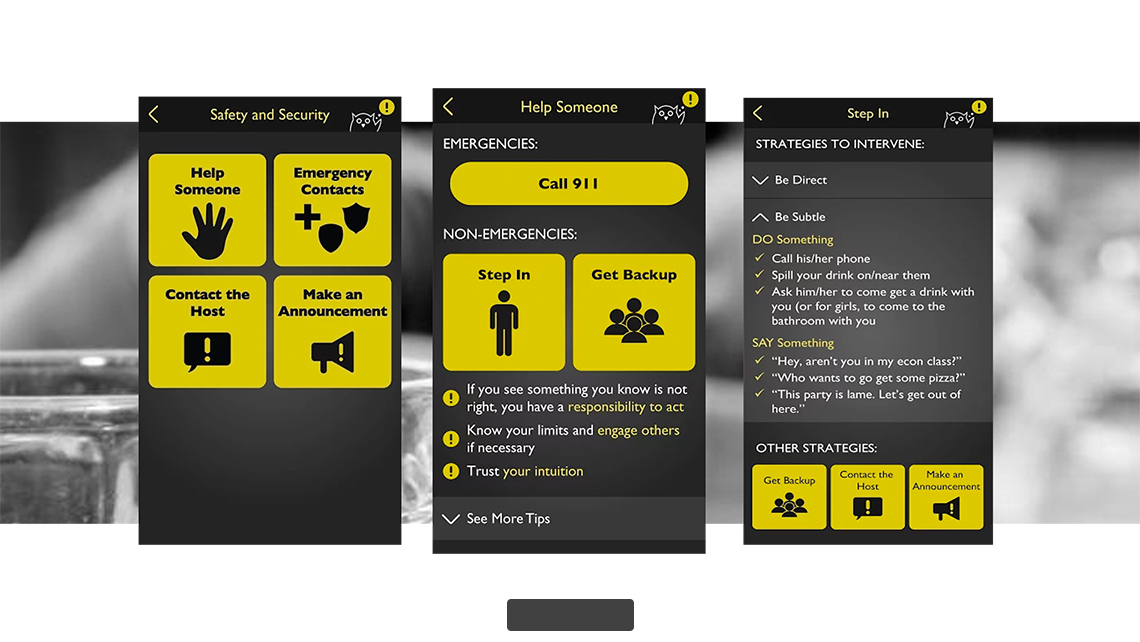 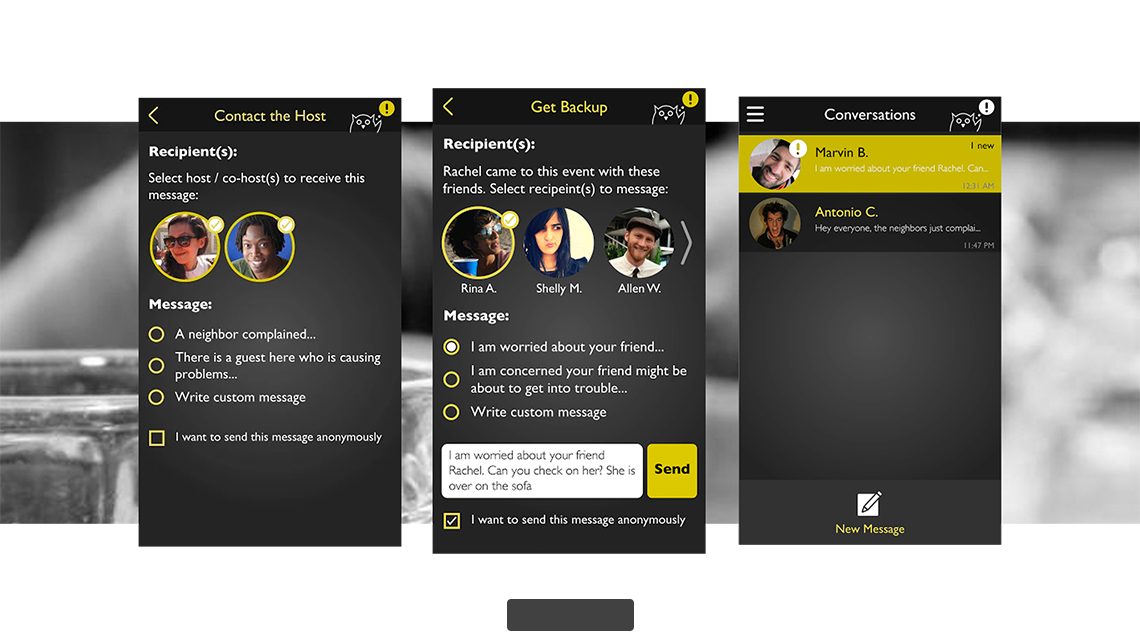 According to a recent study by the White House Council on Women and Girls, nearly one in five young women in the United States are sexually assaulted while in college. Increasingly, young women are victimized by someone they know and trust; it is estimated that over 90% of female rape victims know their attacker.

The challenge was to create an innovative concept that addresses the unique circumstances that lead to acquaintance rape, while being highly cognizant of the needs and aspirations of young college women.

Our initial research led us to understand the underlying reasons behind this problem, and identify the following opportunity: 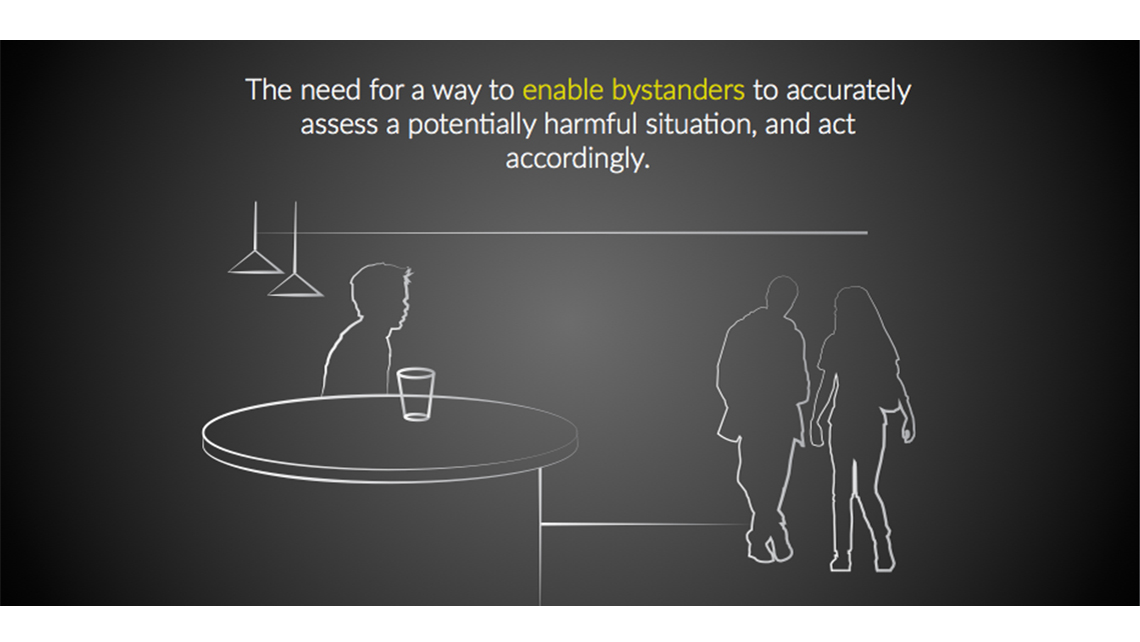 Conducting various user interviews helped refine our team’s understanding of the complex social issues surrounding acquaintance rape, and reaffirmed our belief that bystander intervention is a viable opportunity for prevention. The insights from these conversations helped shape our product criteria and requirements.

Here are some of the insights we uncovered regarding the reasons why people don’t intervene: 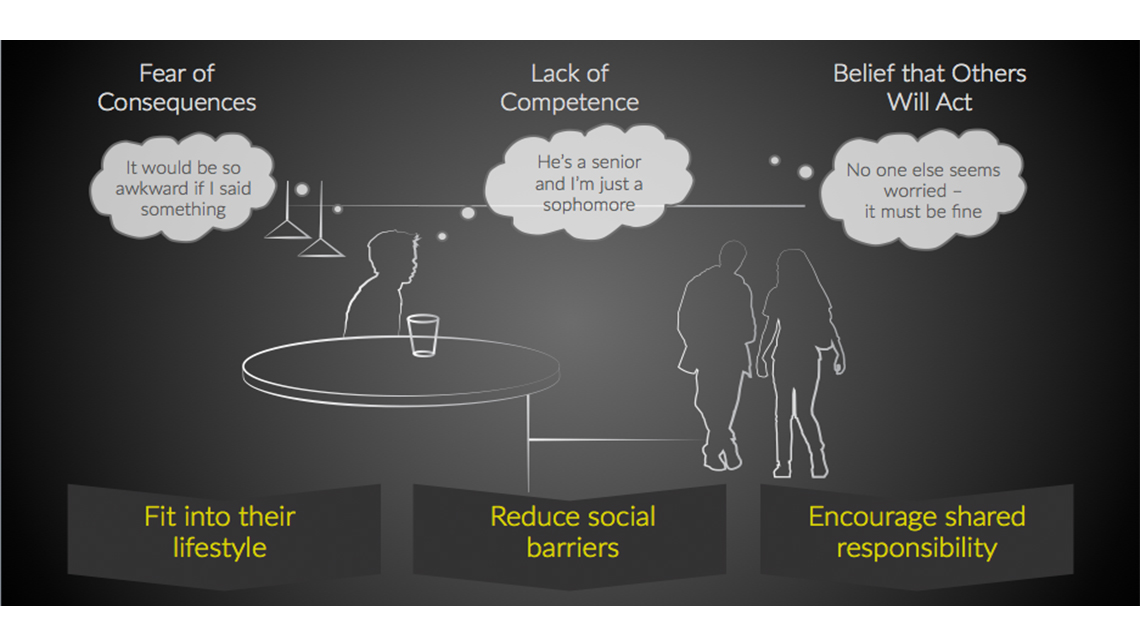 To address the social concerns realized during our research surrounding intervention during harmful situations, our solution had to: 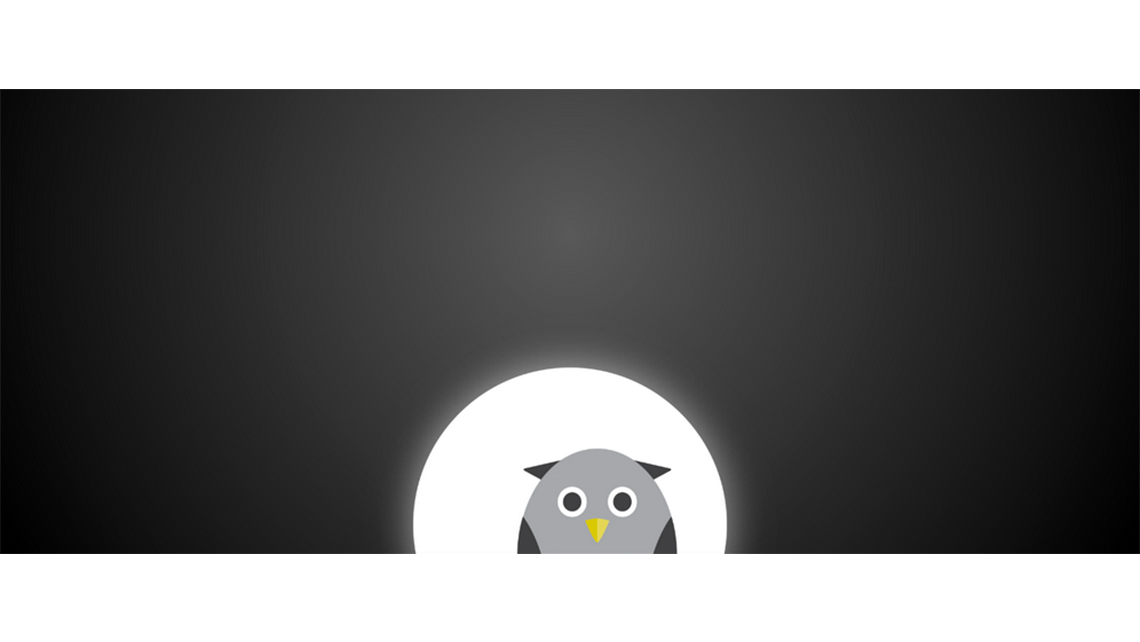 NightOwl, is a mobile application that provides a novel way for guests and hosts of social events to interact. At its core, NightOwl is a social tool that enables partygoers to communicate with each other. This semi-anonymous platform is private to event attendees, and the network -- including anything shared on it -- only exists for as long as the event itself does. 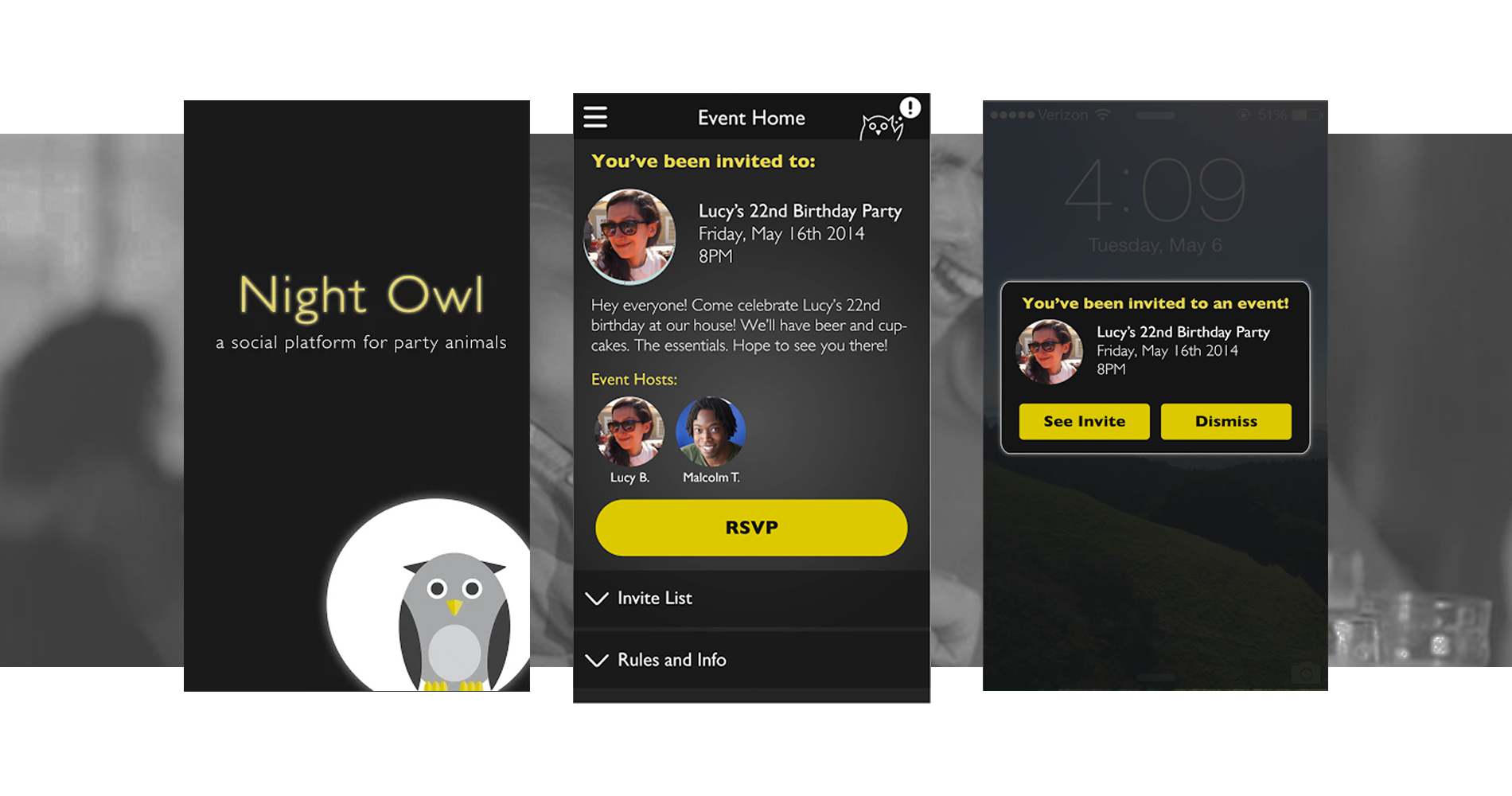 Connect With Other Guests 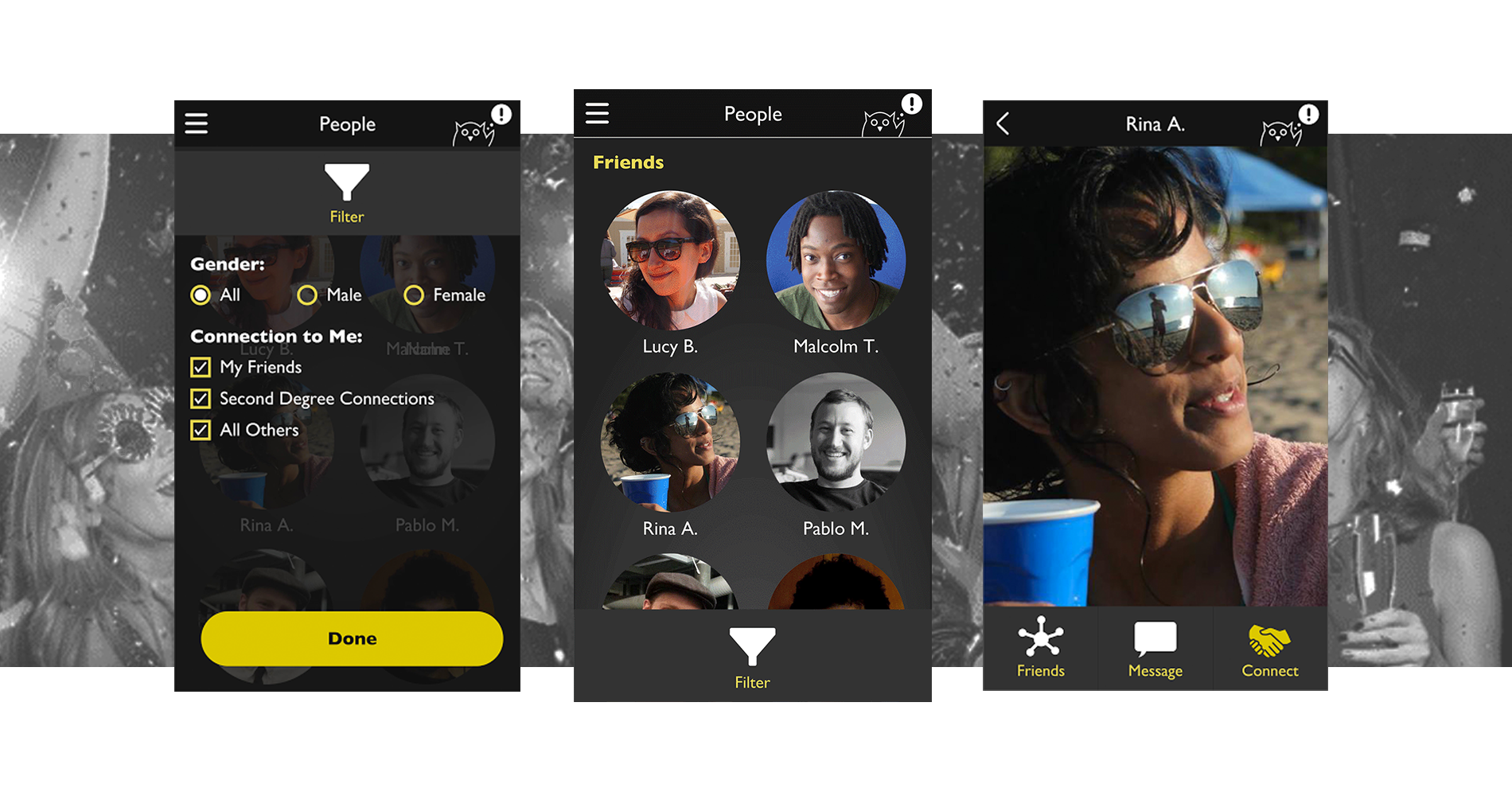 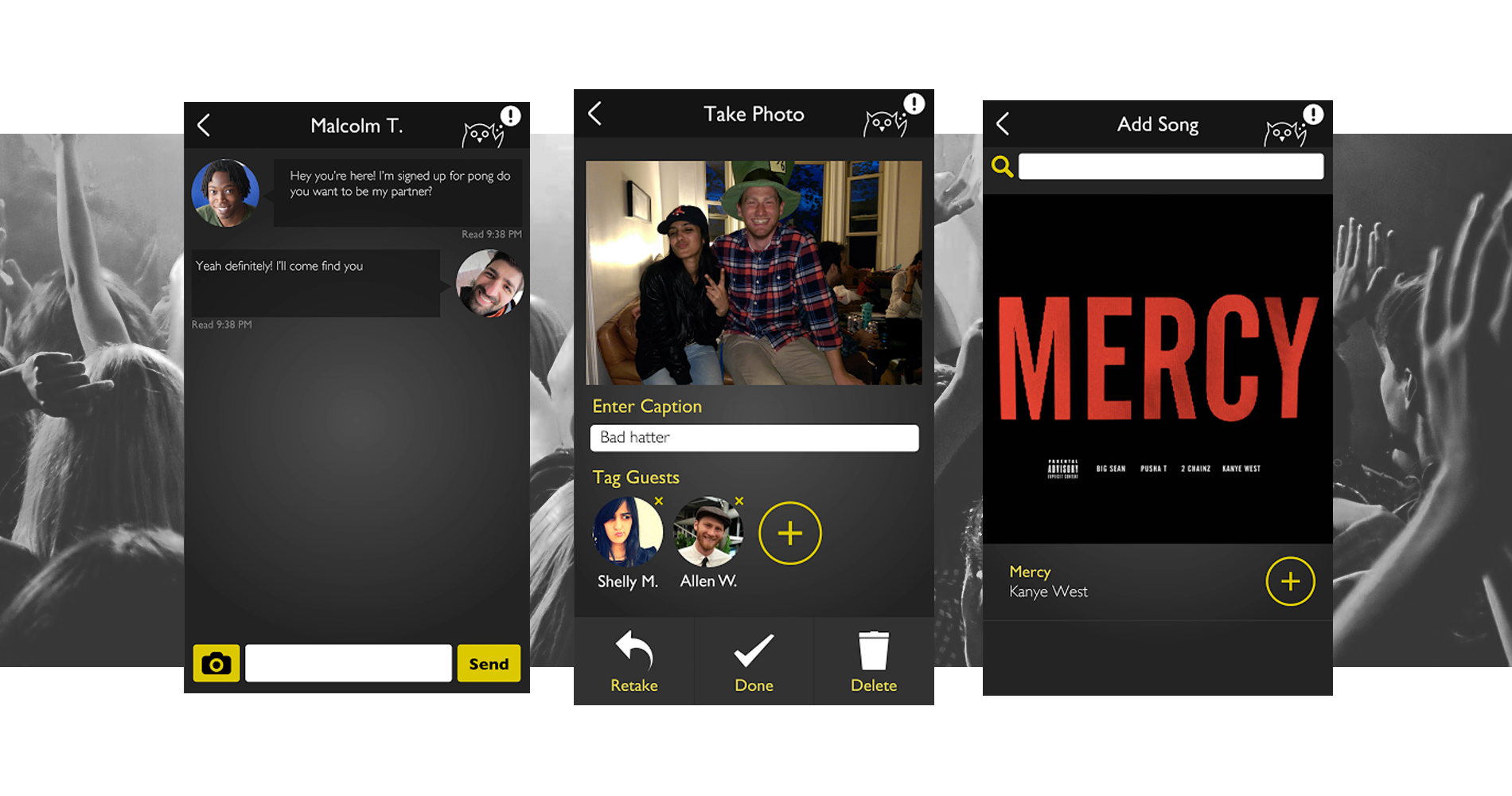 NightOwl’s messaging and sharing features not only encourage guests to connect with each other, but also promote a shared responsibility to look out for one another.

NightOwl allows users to anonymously report potentially harmful or dangerous situations, such as the presence of an unwanted guest, inappropriate behavior from a fellow partygoer, or a scenario that could lead to assault.

Users can send preset messages, either to the event’s host or to all of the event attendees, to call attention to the issue or garner support before intervening in potentially dangerous situations. NightOwl also provides brief tips on how to handle a variety of safety-related scenarios and quick access to emergency contacts.

Help Someone or Step In 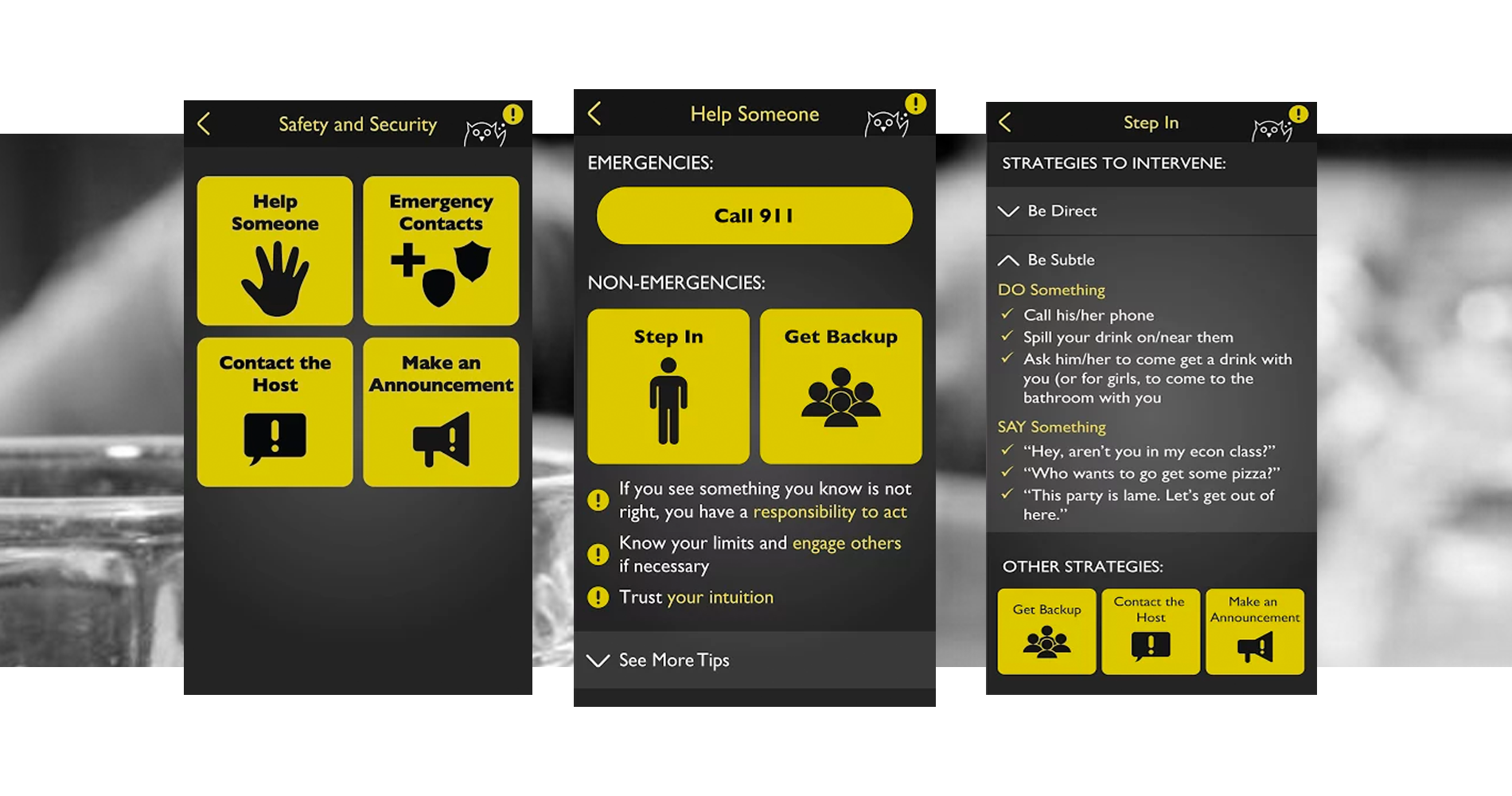 BEHIND THE SCENES: THE DESIGN PROCESS

Background research on acquaintance rape provided a foundation from which we were able to brainstorm potential Product Opportunity Gaps (POG). Each POG represents an area of need related to acquaintance rape that could be fulfilled by a new product or service. Our brainstorming session resulted in a list of over one hundred POGs.

To simplify the analysis of these opportunities, our team performed an affinity diagramming exercise where similar POGs were grouped together, and each group was given a category name. This resulted in eleven broad categories of opportunities: Enablers, Scenarios, Awareness, Consent, Recognition, Consequences, Bystander, Aggressor, Education, Reporting, and Victim.

A diagram of the various individuals and organizations that could be involved in or affected by an instance of acquaintance rape was developed. This diagram placed the perpetrator and victim at the center, with subsequent stakeholders placed on concentric circles to indicate their relative distance from the actual incident of rape. Through this “powers of ten” analysis, stakeholders were identified at four major levels: 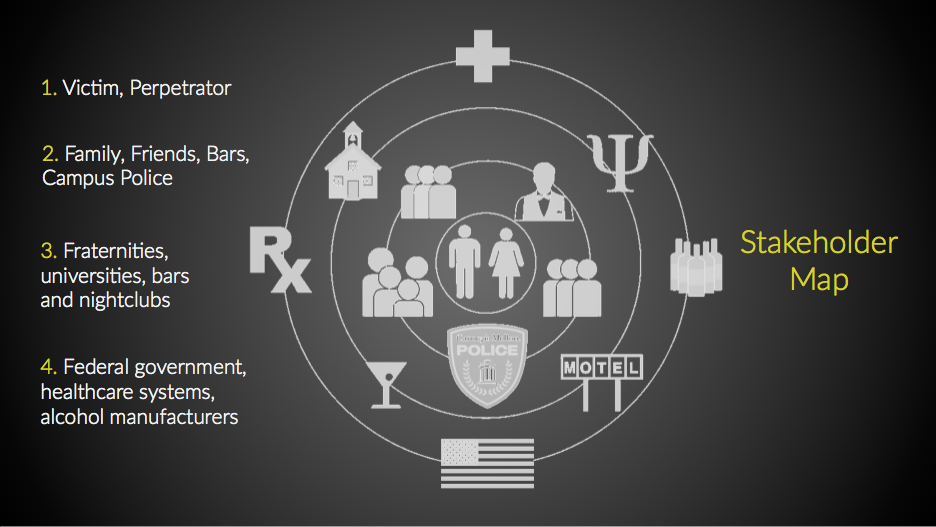 We refined our stakeholder analysis by diving deeper into the unique characteristics, needs and desires of each stakeholder. We identified six key stakeholders that we believe are most closely associated with bystander intervention and acquaintance rape on college campuses. 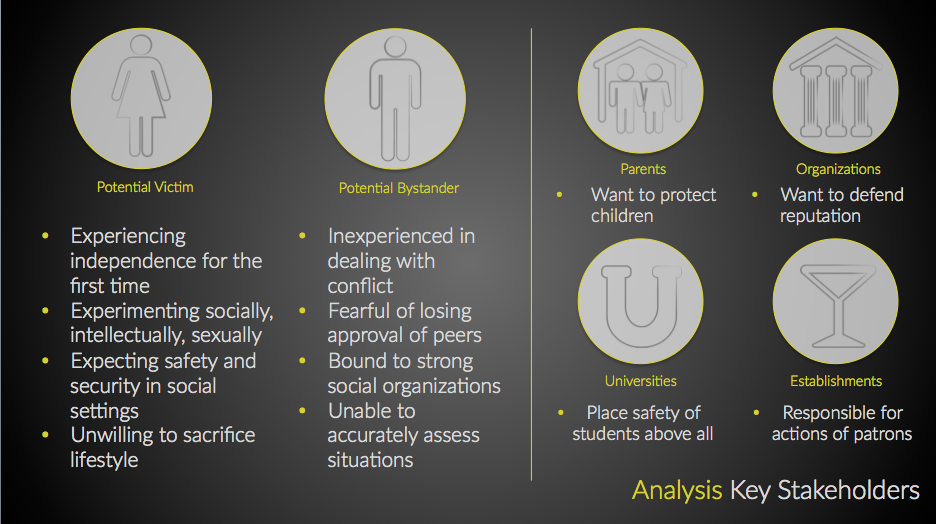 We conducted interviews with various subject matter experts as well as potential stakeholders, whose insights helped define the criteria for our potential solution.

We conducted focus group sessions where we worked with undergraduate students to create user journey maps. They also drew certain features they would want in an app as they walked through through the user's journey using Swim Lane Diagrams.

We conducted a value opportunity analysis in order to identify gaps in the current market. We evaluated both the mobile applications and bystander training programs against seven classes of attributes, including emotion, ergonomics, aesthetics, identity, impact, core tech and quality. Our team developed context-specific definitions for the attributes within each class that are appropriate for the issue of sexual assault.

During the third phase of our project, our team leveraged the insights gained from our primary and secondary research efforts to develop specific product concepts. We then evaluated these concepts through stakeholder feedback sessions and a Pugh analysis before refining our product definition.

We repeated this exercise with a second user focus group but focused on the wearable device concept. For this exercise, we created Velcro models of various wearable devices, including wristbands and necklaces, and allowed the participants to attach features that they felt would be useful. These exercises allowed us to gain additional insight into how our target users expect to interact with the products in a bystander intervention context.

There were three main takeaways from these sessions:

During the fourth and final phase of our project, we refined our concept feature set, settled on a user interface design language, and researched potential marketing strategies while continuing to validate our concept through additional user feedback sessions.

To begin integrating these design inspirations into our product, we created paper prototypes of the key features. 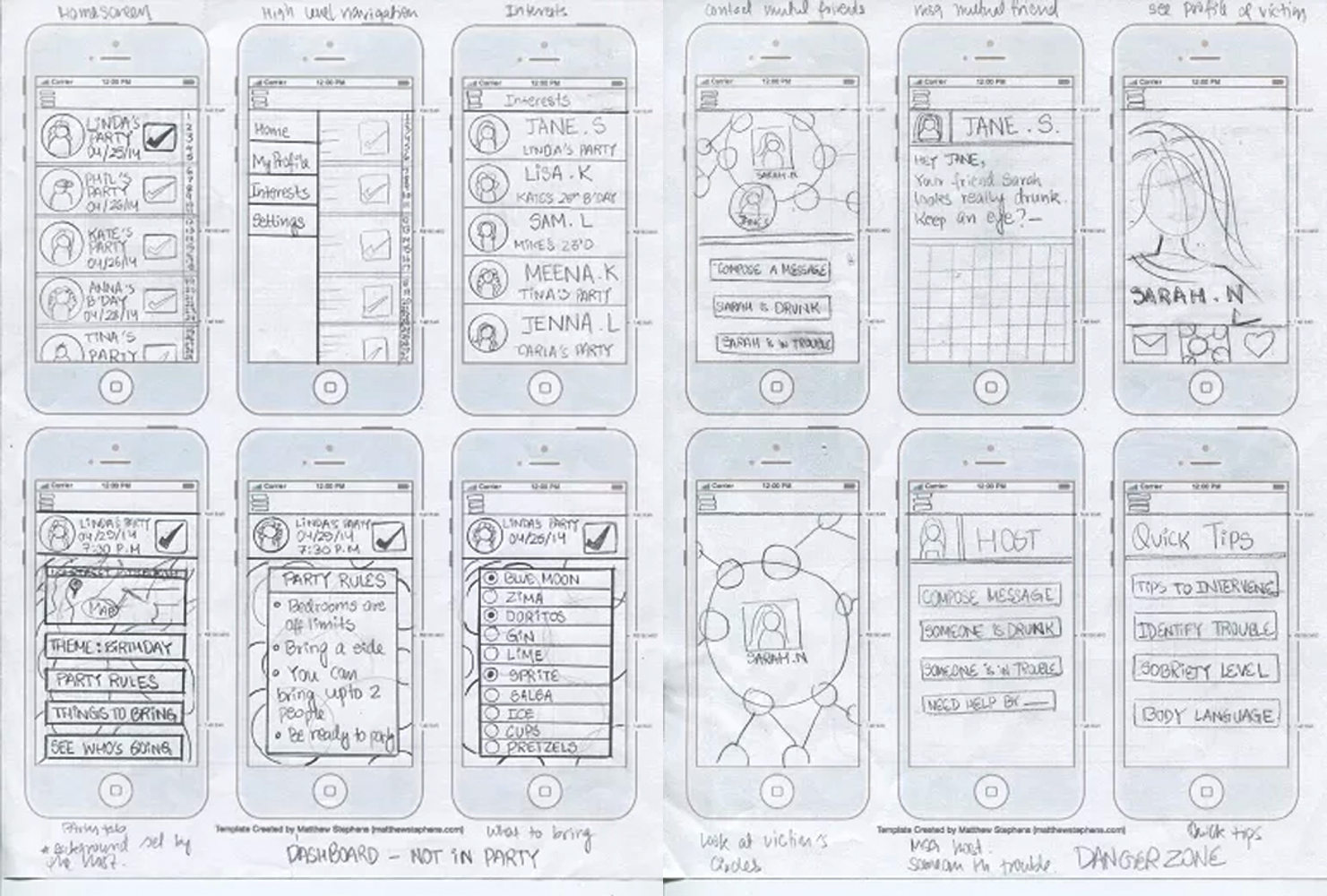 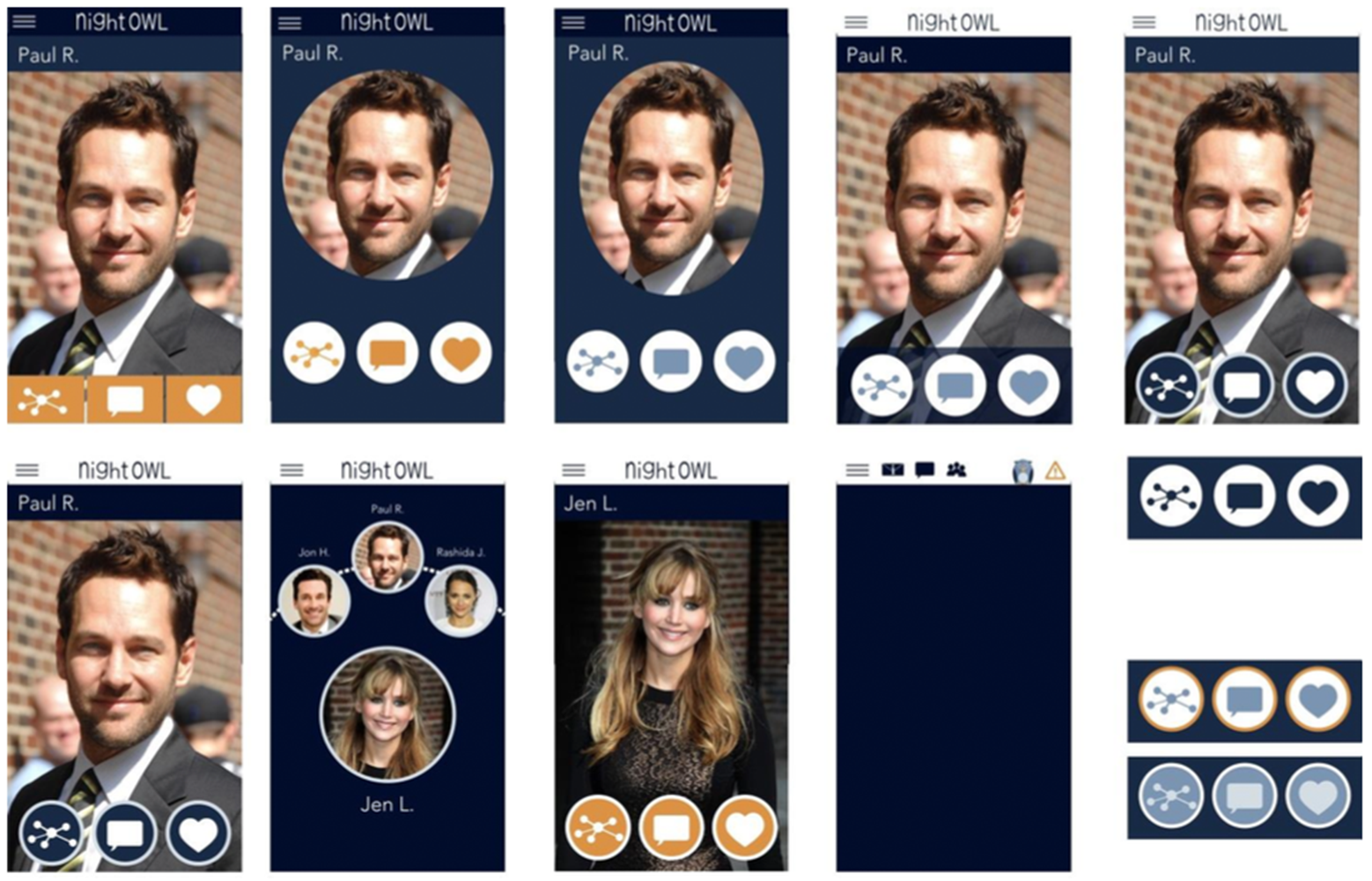 A phone application that creates a temporary network during a party and allows users to organize, plan and check-in to events; communicate and connect with other guests or the host; and provide a painless, anonymous means for calling attention to potentially troublesome situations. 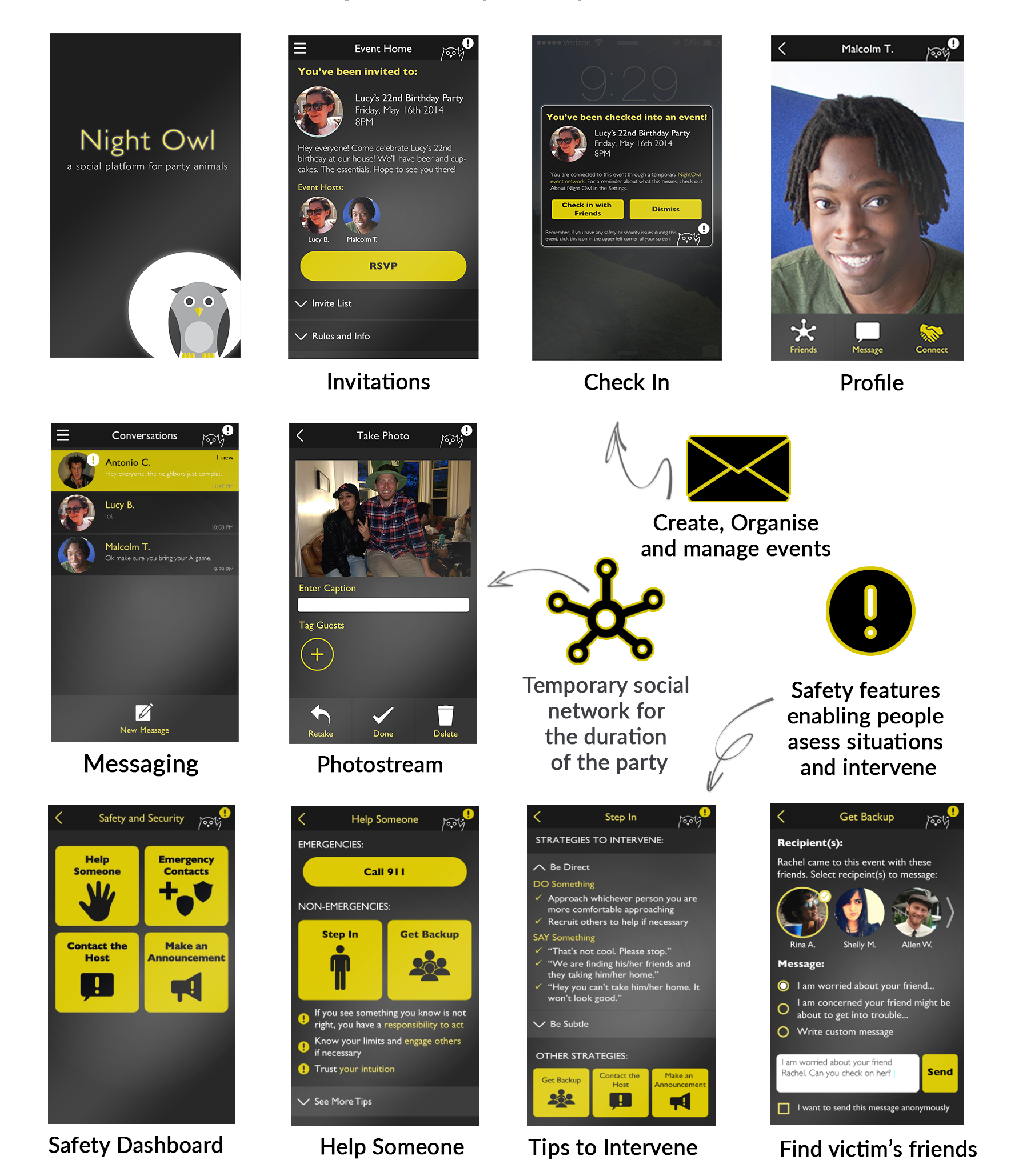 NightOwl, provides users with a powerful social networking tool that emboldens users to speak up and step in when they witness a situation that could lead to acquaintance rape. NightOwl addresses many of the key underlying issues preventing young people from intervening, including:

Fear of consequences: NightOwl enables users to speak up anonymously, or get backup before intervening in a potentially dangerous situation.

Lack of competence: NightOwl augments bystander training initiatives by putting quick tips on how to intervene safely directly in the user’s hands when they need it most – at the point of intervention.

Dilution of responsibility: By reducing the social barriers to speaking up, NightOwl makes it everyone’s responsibility to act when they see something that isn’t right.